Deciphering the beginning of the universe 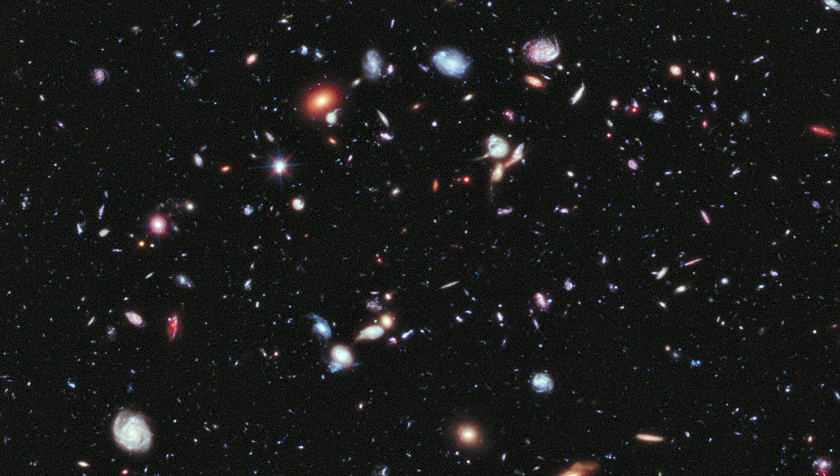 Image 1: The structure of the universe.This deep field image from the Hubble space telescope shows an enourmous number of galaxies. Why did these galaxies form in these particular places, and how is this related to quantum physics that took place fourteen billion years ago? Image: NASA; ESA; G. Illingworth, D. Magee, and P. Oesch, University of California, Santa Cruz; R. Bouwens, Leiden University; and the HUDF09 Team.

The observable universe today consists of around two trillion galaxies separated by gigantic portions of mostly empty space. According to the Big Bang theory, these galaxies were formed by the action of gravity from a very hot and dense initial soup of particles. But how homogeneous was this soup? Were the particles distributed at the exact same distances from each other or was the density different at different regions of the baby universe? More generally: how can we physically explain the initial distribution and velocities of the particles in the primordial soup? It turns out that inflation, the fantastic idea that helped cosmologists to solve the flatness and horizon problems (as explained in this previous article on the Quantum Universe website), can also account for these initial conditions.

Inflation proposes a period of very violent expansion of the early universe. In numbers, it tells us that its size stretched at least by a factor of 1024 (a huge 24-digit number) in the first 10-35 seconds (a tiny number with its first nonzero digit in the 35th place after the decimal period) after the Big Bang. The reason for this expansion was the presence of a very large amount of energy — whose origin is thought to be a particle called the inflaton — permeating all of space. According to the quantum mechanical description of our world, pairs of particles can randomly emerge in the vacuum. When a pair of these inflaton particles appears, the amount of energy contained in that particular region of space changes, and so does the local rate of expansion. As a consequence, some parts of the universe inflate for longer, resulting in different densities at the end of the inflationary period. The gravitational attraction pulled matter together, making the overdense regions even more dense and starting the process of star and galaxy formation. You might think that these random fluctuations were too small to have any noticeable effect because they had a quantum origin, but recall that inflation stretches distances by a huge factor, so these inhomogeneities were inflated from quantum to cosmological scales. This is the beautiful story that inflation tells us: some tiny quantum fluctuations in the beginning of the universe seeded the formation of the galaxies, stars and planets that we see today!

There are various ways in which we can find out what these primitive density fluctuations looked like — for example inferring them from the current distribution of galaxies in the universe. But what can we actually learn from them? These density ripples were created in a quantum — and hence random — way, but their distribution in space still obeys an observable pattern. This is a consequence of their origin: each inflaton pair that is created is pulled apart by the expansion, so the two particles end up in different points of space. The inhomogeneities in these two different points will then be correlated, as depicted in image 3 below. If we compute these correlations between pairs of points using the inflationary theory, the result agrees extraordinarily well with our observations of the actual universe. 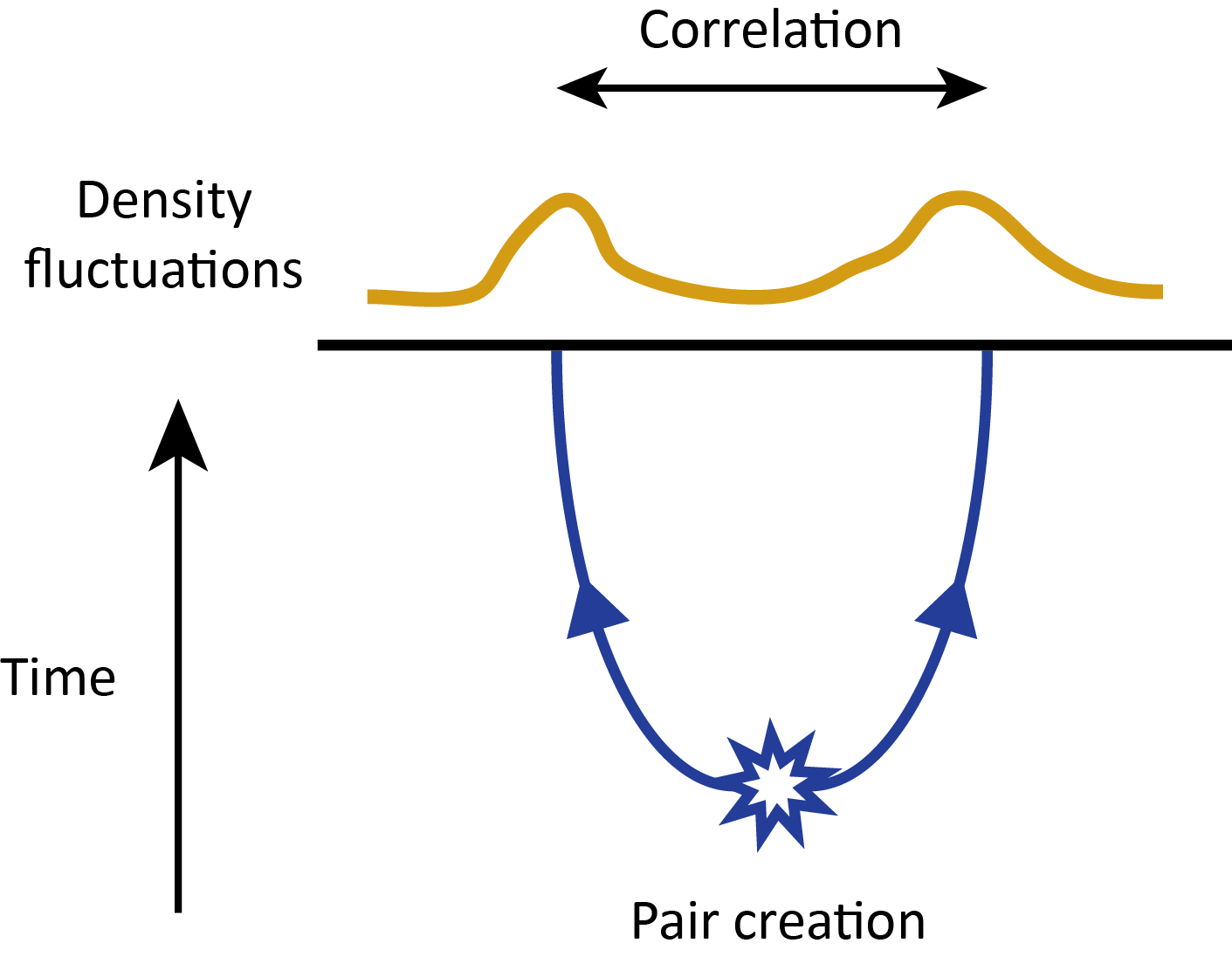 The fact that we can measure the primitive fluctuations even after fourteen billion years opens up huge opportunities. If there were other particles in the universe during inflation, pairs of them would have probably been created as well. By means of different physical processes — like interactions or decays, see image 4 below — these particles could have left a footprint in the fluctuations, so studying the latter gives us plenty of information about the birth of the universe! To better understand why this is so exciting, let us delve into the already mentioned fact that particles can be created out of the vacuum. This phenomenon obeys the following rule: the more massive the particle, the more energy you need in order to bring it into existence. This is the reason why the particle colliders that physicists build have an ever-growing size and power. Remember now that during inflation all of space was filled with a huge amount of energy. The precise numbers are still not known, but according to some estimates this energy could be up to ten billion (ten thousand million or 1010) times higher than that of CERN’s Large Hadron Collider, the most energetic experiment ever built by humans. This means that inflation can be thought of as a huge particle collider, and by measuring its primordial fluctuations we can probably learn about particles and processes that we can’t even dream of reproducing here on Earth!

All of this is, of course, easier said than done. In practice we have not yet been able to decipher any information about new particles and interactions in the data provided by our telescopes. The reason is that the traces of these particles and interactions are too mild, so it is only possible to find them if one really knows what they look like and if the sensitivity of the telescopes is improved. The former condition means that theoretical cosmologists have some work to do. What we need to work out is a set of rules of the type “if a particle of mass M and spin (“rotation”) S was present during inflation, then the fluctuations must have this particular shape.” 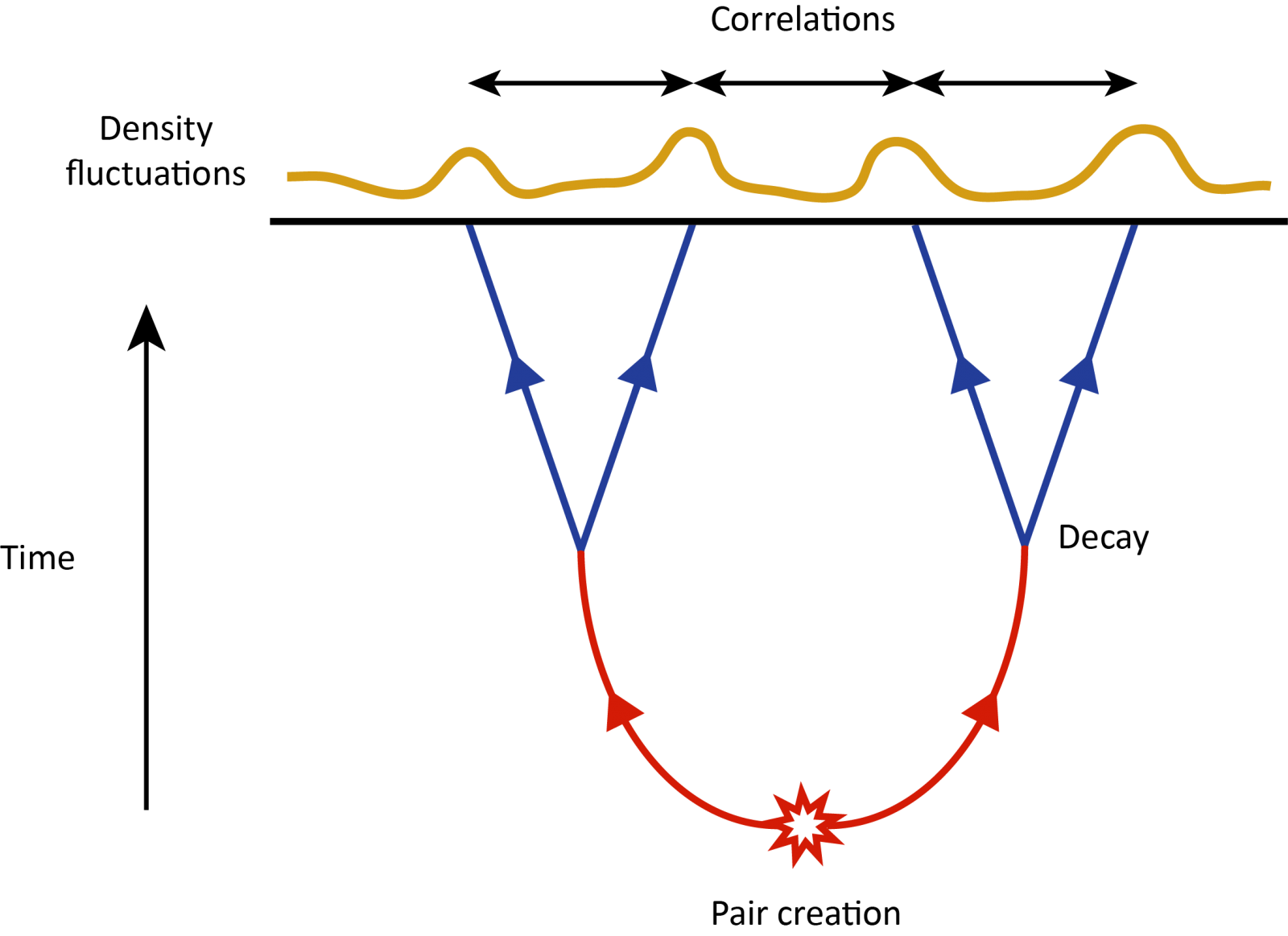 Image 4. The universe as a particle accellerator.A pair of particles (red lines) is created and pulled apart by the expansion of the universe. Later, they decay into other particles (blue lines) which originate density fluctuations. By looking at the shape of these fluctuations, one can learn a lot about the whole physical process and the particles involved.

The classical recipe that theoretical physicists follow in order to calculate these rules turns out to be quite inefficient. It consists in starting from a given set of particles and their allowed interactions in the inflationary period, then solving the equations that describe their evolution in time and finally obtaining the density fluctuations as a result. This is a method based on “brute force,”involving very long and cumbersome calculations. There is, however, some hope for improvement. We have a number of requirements that the final results need to satisfy. These conditions come from well-known physical facts like “information cannot propagate faster than the speed of light” or “the laws of physics are the same at every point in the universe.” Think for example about the collision of two electrons in a laboratory: the outcome cannot depend on whether the experiment takes place in Amsterdam or in Tokyo! More precisely, the mathematical expression that describes the result of such a collision can depend on things like the speed and relative orientations of the electrons, but not on the place of the universe where we put our experimental device or the direction in which it is pointing.

The so-called cosmological bootstrap project — a collaboration between physicists in the Netherlands and the US — aims to compute the primordial fluctuations by exploiting the power of these requirements. Instead of the classical and inefficient recipe mentioned before, this method is based on finding the most general mathematical function consistent with the given list of requirements. These requirements are so powerful and constraining that very often this function is unique and corresponds to the correct physical answer! This is the reason for the name “bootstrap,” also used in other areas of physics: a bootstrap is a tab at the end of a boot, and “to pull oneself up by one’s bootstraps” means to lift yourself up without any external help. This method has been used in the last decades to obtain the functions that represent collisions of particles in the current universe — like the electron example above — but nobody had ever used it for computing the primordial fluctuations created right after the Big Bang.

The cosmological bootstrap approach is young but it has already produced some interesting results. In the first and second publications of the project, Nima Arkani-Hamed, Daniel Baumann, Austin Joyce, Hayden Lee, Guilherme Pimentel and myself used this method to calculate the characteristic footprint left by massive rotating particles that, after being created in pairs, decay into inflatons — a situation that corresponds to image 4 if the blue lines are taken to be inflatons. The focus is now in extending these calculations to other kinds of particles: gravitons (the particles that mediate the gravitational interaction), photons (particles of light), and so forth. Once we obtain an extensive catalogue of fluctuation shapes we will be ready to compare with the observations — provided our telescopes are good enough, of course — and pick out which of these particles and interactions were present back at the start of time.

In summary, we have seen that the primordial fluctuations tell us about the initial conditions of our universe and contain information on physical processes that are out of reach from the experiments we do on Earth. The cosmological bootstrap offers a promising recipe to obtain the distinctive shape of these fluctuations in terms of the particles and interactions that created them. Planets, stars, intelligent life and the electronic device with which you are reading these lines, it all traces back to the wiggly quantum fuss of inflation. Today, fourteen billion years later, the dream of unravelling that fuss is closer to being realized than ever!