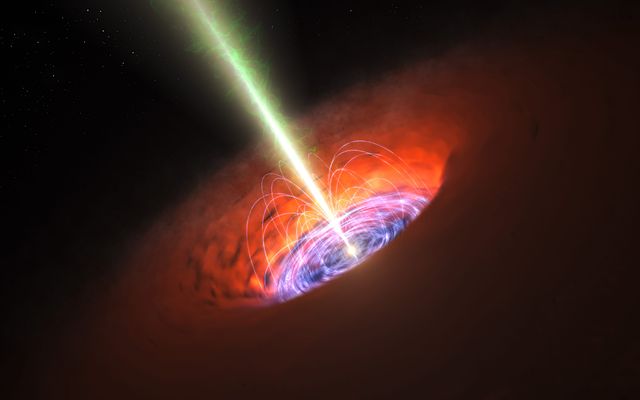 For the physics enthusiast today, the idea of space and time being one unit seems natural, but more than 100 years ago it was one of Albert Einstein’s greatest insights and gifts he left us. Another was that he realized that gravity, the force keeping us in bed every morning, was equivalent to the curvature of spacetime. In order to be able to describe what happens in curved spacetime, we need to understand a very important tool from mathematics: the metric g. The metric is a tool that encapsulates the geometry of space and time. More concretely, it unifies information about the lengths and angles between two basis vectors describing the spacetime. What does that mean?

The numbers on the diagonal from top left to bottom right, which are labeled by gtt and gxx, describe the lengths of the basis vectors in the time direction (t, 0) and in the space direction (0, x) respectively. (Note that we can label any point in space (x,0) if we wish – for example, (x,0) measured in millimeters is quite different from (x,0) measured in metres! – so to actually describe the distance of (x,0) from the point (0,0) we need some further mathematical input. That input is precisely what the metric gives!) Likewise, the off-diagonal elements gtx and gxt describe the angles between the time and space basis vectors. If the basis vectors are perpendicular to one another then gxt = 0, gtx = 0 and hence we only consider the diagonal numbers.

One example, which describes our world without gravity is the Minkowski metric

The fact that the component gtt = −1 is crucial to understand why time and space, although being a unified concept, are still somewhat different conceptually. For instance, moving back and forth in a car just requires a shift in gears. But moving backwards and forwards in time is, at least to my knowledge, only possible if you are Tony Stark and want to defeat Thanos. Hence the defining property of time is that it forces us to move into one direction: the future and nothing else. The fact that time is so different from space can be encapsulated mathematically by a simple sign of -1 in the metric – quite surprising!

The Minkowski metric may still look simple, but that will change now, as we now have to turn to the case where we have gravity. The gold standard for describing gravity in the real world is the Schwarzschild metric. It describes how a spherical object, like the sun, with mass M, affects the curvature of spacetime in its surroundings. As we are dealing with spheres we may write r  for the outward coordinate instead of x. The table for the Schwarzschild metric looks as follows:

One might also wonder what the symbol rs means. We call this the Schwarzschild radius and it takes the form

where we find Newton’s constant G, the speed of light c and the mass M, for the sun as an example. We see that as the mass M increases, the Schwarzschild radius also grows.

For the sun, the value of rs is roughly three kilometers. That is, the sun itself is actually bigger than its Schwarzschild radius, and we cannot reach that particular distance. However, very compact objects also exist that are smaller than their own rs. From analogies to Newton’s theory we can identify the Schwarzschild radius with the radius at which photons are no longer able to escape the gravitational force of an object with mass M. If no photons escape, meaning that no light escapes, an object will just look black from the outside. We just found a black hole! The Schwarzschild radius hence defines a horizon from which we cannot see any photons coming out. We call this the black hole horizon.

Swapping of time and space

What is now so special about the black hole horizon? Well at this point space and time change roles! You can see that this is true by looking at the Schwarzschild metric more closely. For that we first make it clear for ourselves that if we are outside the horizon (r > rs) we find that

This means that as in the Minkowski metric the time component is negative (gtt < 0) and the space component is positive (grr > 0), as expected.

Let’s imagine we jump into the black hole. As we pass through the horizon our radial distance r will become smaller than the Schwarzschild radius rs. Now, like the photons above, no matter what we do or how fast we could go we cannot escape the gravitational pull of the black hole.

Now comes the crucial step. If we use this equation and put it into the Schwarzschild metric we will now find that the gtt component is positive (gtt > 0) and the grr component is negative (grr < 0), meaning that space and time, beyond the horizon, switched to time and space respectively!

So what happened here? How can it be that space and time change roles?

To reiterate, the notion of hitting the singularity has two points of view:

Gravity inside the horizon forces us to move towards our final destination: the singularity, which is now an event in time rather than a point in space. That is why around black holes, space and time change roles!

To summarize what have we learned:

To put it in a nutshell, black holes are cosmological entities with the ability to change space and time, making them truly the masters of the universe.

[2] There is a small caveat to this statement. One could have also done the exact opposite and defined that time has a positive metric component and space a negative component. The important fact for the swapping of time and space is that the signs differ, and after passing the horizon the signs of these components change. For the curious, in the literature this mathematical freedom of overall sign choice is called the metric signature.